Imelda McCain had a very special reason for opening a toy store five years ago: her son. Like so many new mothers, McCain began taking a closer look at the toys that were on the market. 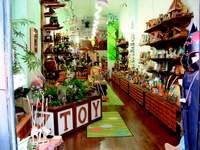 “When I became a mom, there was a shift in awareness,” says McCain. “I wanted a better world for my son.” Believing that “the abundance of plastic and digital toys are chipping away from the innocent and creative play that we once had with nature,” McCain chose to open a store that specialized in toys and crafts made by hand from around the world.

Playing Mantis started out with one location in 2006 in Nyack, NY. A second location was opened last May in the trendy Tribeca neighborhood of New York City. Shortly thereafter, McCain closed the Nyack location to focus on the store in Manhattan.

At the first store, McCain did everything herself – “the walls, the storage, the purchasing, the windows” – with help only from her friends and family. She’s still very much hands-on at the 1,800-sq.-ft. Tribeca location, but now has help from two part-time employees.

The majority of products sold at Playing Mantis are handcrafted, including items that are beeswax finished, use The store houses”The store houses many lines of items that are ecofriendly and socially responsible.”water-based or plant/ vegetable-dyed paint, are recycled or made from reclaimed wood, or have other good-for-the-planet attributes. There are Teddy bears made from recycled fur coats, as well as toys and crafts from organizations that sustain and support either the environment or a social cause. 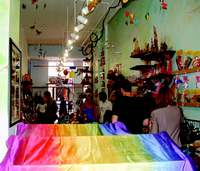 The toys at Playing Mantis come from countries around the world, such as Kenya, Hungary, Germany, Poland, Peru and

Argentina, as well as many states from within the U.S.A., including Vermont, New York, Michigan, Massachusetts, California and Maine. Among the store’s best-sellers are handcrafted wooden puzzles from Californiabased The Puzzle Man and handcrafted toys and dolls from German resource Käthe Kruse.

Other lines include dolls and crafts from Community Creations in Africa, which helps the community to create products that support and promote better human conditions; wooden toys and woven crafts from Tahanang Walang Hagdan (House With No Stairs) in the Philippines, which provides employment and opportunities for persons with disabilities; wooden toys from Camphill Village in New York, a residential community including adults with developmental disabilities; Tree Blocks, hand-cut branch-shaped blocks that use Live music and balloons”Live music and balloons greeted customers at the grand opening of the Tribeca location.”discards of managed- paper forests; birdhouses from a family business in the Catskill Mountains that handcrafts items from salvaged barnwood; wooden toys and crafts from The Fellowship Community, an intergenerational work-based, long-term care facility – and the list goes on and on.

McCain travels throughout the U.S.A. and Europe (often with her son, Lucas) – visiting places that range from the Nuremberg Toy Fair in Germany to American craft fairs – to find lines that fit in with her special merchandise mix. That mix is appreciated by numerous customers, who include children and their parents, as well as grandparents, artists, teachers, therapists, pediatricians and collectors of arts – the latter of whom visit the store for its offering of high-end, collectible toys that sell from $200 to $600. These are usually, signed, dated and are limited editions, notes McCain.

“I believe I make a difference to a few,” says McCain, “not just to the artists and craftsmen, but to some children who would marvel about the natural toys a bit longer before picking up another plastic toy or a video game. The store exists to inspire children, to show them what our hands can do in collaboration with nature. How it can spin, carve, knit, whittle and color … making things beautiful and functional.”