You are here: Home1 / About2 / The Neighborhood 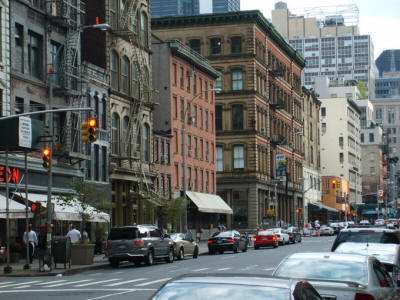 The Tribeca name came to be applied to the area south of Canal Street, between Broadway and West Street, extending south to Chambers Street. The area was among the first residential neighborhoods developed in New York beyond the boundaries of the city during colonial times, with residential development beginning in the late 1700s. By the mid 1800s the area transformed into a commercial center, with large numbers of store and loft buildings constructed along Broadway in the 1850s and 1860s.

Textile Building(1901) in the Tribeca Historic DistrictDevelopment in the area was spurred by the extension of the IRT Broadway – Seventh Avenue Line, which opened for service in 1918, and the accompanying extension of Seventh Avenue and the widening of Varick Street during subway construction in 1914. That resulted in better access to the area both for vehicles and for travelers using public transportation. The area was also served by the IRT Ninth Avenue Line, an elevated train line on Greenwich Street demolished in 1940.

By the 1960s Tribeca’s industrial base had all but vanished. The predominance of empty commercial space attracted many artists to the area in the 1970s. Since the 1980s, large scale conversion of the area has transformed Tribeca into an upscale residential area. 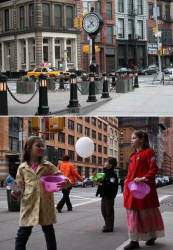 In 1996, the Tribeca Open Artist Studio Tour was founded as a non-profit, artist-run organization with the mission to empower the working artists of Tribeca while providing an educational opportunity for the public. For 14 years, the annual free walking tour through artist studios in Tribeca has allowed people to get a unique glimpse into the lives of Tribeca’s premiere creative talent.[ Tribeca suffered financially after the September 11, 2001 terrorist attacks, but government grants and incentives helped the area rebound fairly quickly. The Tribeca Film Festival was established to help contribute to the long-term recovery of lower Manhattan after 9/11. The festival also celebrates New York City as a major filmmaking center. The mission of the film festival is “to enable the international film community and the general public to experience the power of film by redefining the film festival experience.” Tribeca is a popular filming location for movies and television shows.

The name Tribeca was coined by city planners in the 1960s to designate the “Triangle Below Canal Street.” Originally farmland, Tribeca was commercialized in the 1850′s. Now lofts and restaurants have moved into the old warehouses and factories. But Tribeca retains its aura of a neighborhood with a past. 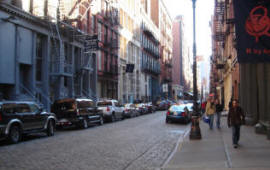