Walk into Nyack’s Playing Mantis toy store, and you get an immediate feeling of Zen.

That’s not a feeling associated with big-box retailers, which are dominated by aisles of manufactured plastic playthings that honk, beep, flash, bang, clang and cry.

Make no mistake: Playing Mantis has its fair share of cars, trucks, trains, dolls and games. But not a single toy there requires batteries or an electrical outlet – and all still manage to inspire lots of fun.

“I call it an imagination-powered store,” says owner Imelda McCain.

McCain, a former oncology nurse who opened her shop in the fall of 2006, moved last month to a new storefront on Nyack’s North Broadway. At the same time, she opened a second outpost in Tribeca.

These moves haven’t led to a shift away from McCain’s original vision, though. She still believes in simple, handmade toys that promote an interest in the global community.

That means Playing Mantis is stocked with eco-friendly products like books printed on recycled paper and dollhouses made out of reclaimed trees. Scattered throughout the shop are teddy bears stitched from secondhand fur coats, wooden airplanes propelled by solar panels, and puzzles painted with non-toxic watercolors.

McCain also makes a point of carrying products made by artisans from around the world, many of whom are poor or disabled. So shelves are lined with dolls and stuffed animals sewn by impoverished women in Kenya, Peru, Nepal and Argentina; the sale of these toys enables them to support their families and improve their villages.

“If you’re going to buy something, it’s not just senseless buying,” says McCain of her merchandise. “When you buy something, somehow it makes ripples, either in the environment, the community, or to yourself.”

It’s not as if McCain is anti-Toys “R” Us. As a baby, her son, Lucas, who’s now 9, loved Elmo and happily watched Baby Einstein videos. 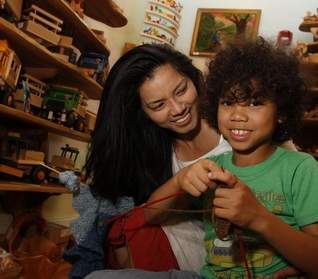 But by the time Lucas was in preschool, McCain had developed concerns about an overabundance of electronics. She also wanted toys that would teach Lucas about other countries and cultures, but found her choices limited. “I just thought there must be other options,” she says. “This is America, after all.”

A native of the Philippines and one of nine children, McCain came to the U.S. when she was 21. After arriving in New York, she worked at Mount Sinai Medical Center as a cardiothoracic nurse before moving on to Memorial Sloan-Kettering Cancer Center. There, she met her husband, Donald, who is now chief of surgical oncology at Hackensack University Medical Center, close to where the family lives in Montvale, N.J.

McCain says she loved her job, but acknowledges that caring for the sick took a toll.

“When you come home, you’re emotional,” she says. “You know that [some patients] are going to die…and it’s very hard because you can’t do anything about it.”

After giving birth to Lucas, she decided not to return to the hospital and became a full-time mom. Yet once Lucas started kindergarten, she felt a desire to work again and played with the notion of a socially conscious toy store.

Her husband was the one who spurred McCain into action: He surprised her in 2006 by renting a retail space on Nyack’s Main Street and giving it to her as a Mother’s Day gift. She opened the shop the following September – on her 40th birthday.

With Playing Mantis, McCain is trying to better the lives of others, but she says the store has changed her own life. “I feel good because I love what I do,” she says. “And I make a difference, a little bit every day.”

One recent afternoon at the shop’s new Rockland location, which is near the Runcible Spoon, McCain cheerfully surveys the soft, freshly painted murals on the walls and stretches to reach a sweet, handmade stuffed monkey placed on a high shelf. A local restaurateur stops in to say hello, thrilled that she’s kept the store in the neighborhood. Meanwhile, Lucas plays quietly at a child-sized wooden table, twirling a top shaped like a globe.

“And the world comes tumbling down,” says McCain with a laugh, as Lucas accidentally flips the top across the room.

“This,” she adds, “is my own definition of happiness.”

McCain’s customers are pretty pleased, too.

Suffern’s Karin Gabai is a frequent shopper, having bought blocks, dolls, dollhouses and more as gifts for her five grandchildren. She not only admires McCain’s humanitarian efforts, she thinks that the bell-and-whistle-free toys at Playing Mantis are more likely to spark a child’s ingenuity.

“Her store is alive,” says Gabai. “I get the unusual, I get the creative.”

McCain’s relationship with her vendors isn’t a typical one, either. Once she finds an artist she likes, she’s totally committed.

After discovering the work of David Palhegyi, a Hungarian musician and woodworker who carves folk-like toy sculptures, McCain made a special trip abroad to meet him.

She had dinner at Palhegyi’s home with his wife and five children, and by the time the evening ended, Palhegyi had agreed to let Playing Mantis carry his toys. They didn’t draw up a contract, or consult with lawyers. The two simply shook hands. McCain even gave Palhegyi a $9,000 advance towards future orders.

That faith paid off. Since then, she says other retailers have approached Palhegyi, but he’ll only deal with her – making McCain his official U.S. distributor.

“A lot of people want stuff from him, and he’ll tell them to order from me,” she says.

Other artists praise McCain for appreciating the time and care that goes into their creations.

Fairy Woodland co-owners John Curtis Crawford and his wife, Bridget Wolfe, build delicate miniature houses out of twigs, stones, shells and sand collected from all over the world. The couple says McCain is one of their highest-selling retailers: They’re convinced she sells so many pieces because of her sincere love of their work.

“We adore her,” says Wolfe. “She is so trying to get away from all that plastic and flashing and all those modern mechanical things.”

In less than three years, Playing Mantis has become a self-sustaining business, although it’s not profitable yet. In fact, McCain doesn’t even pay herself a salary.

“As long as I can pay my employees, pay my rent, and my vendors and craftsmen are happy, I’m good,” she says.

Another perk of running the stores, she says, is that it allows plenty of time to spend with her son. She also believes she’s giving Lucas a lesson in entrepreneurship – and serving as an example that one person can change the world a step at a time.

Imelda McCain believes in stocking Playing Mantis – her toy stores in Nyack and Tribeca – with handmade items from artisans from around the world.

Find out more about McCain’s two shops at friendlymantis.com, and here are a few of her favorite items on the shelves right now: