Walk into Nyack’s Playing Mantis toy store, and you get an immediate feeling of Zen.

That’s not a feeling associated with big-box retailers, which are dominated by aisles of manufactured plastic playthings that honk, beep, flash, bang, clang and cry.

Make no mistake: Playing Mantis has its fair share of cars, trucks, trains, dolls and games. But not a single toy there requires batteries or an electrical outlet – and all still manage to inspire lots of fun.

“I call it an imagination-powered store,” says owner Imelda McCain.

McCain, a former oncology nurse who opened her shop in the fall of 2006, moved last month to a new storefront on Nyack’s North Broadway. At the same time, she opened a second outpost in Tribeca. END_OF_DOCUMENT_TOKEN_TO_BE_REPLACED 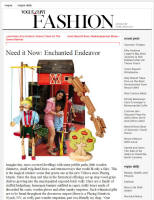 Imagine tiny, moss-covered dwellings with stone pebble paths, little wooden chimneys, small twig-lined doors, and entranceways that would fit only a fairy. This is the magical window scene that greets one at the new Tribeca store Playing Mantis. Enter the shop and take in the fantastical offerings set up atop wood-grain shelves growing into the mural-painted exposed-brick walls. Here are a family of stuffed hedgehogs, homespun bunnies outfitted in capes, teddy bears made of discarded fur coats, woolen gloves and other sundry surprises.

Such whimsical gifts are to be found throughout the downtown outpost (there is a Playing Mantis in Nyack, NY, as well), part wonder emporium, part eco-friendly toy shop. “One hundred percent of our offerings don’t require batteries. These are imagination-powered toys,” says owner Imelda McCain END_OF_DOCUMENT_TOKEN_TO_BE_REPLACED

“Imelda McCain can’t help but restore your faith in humanity. Her worldview is local in nature and global by design… her simple, unwavering desire to make it all work to everyone’s benefit is as egalitarian and humble as it is inspired.” END_OF_DOCUMENT_TOKEN_TO_BE_REPLACED

NEARBY
By Lauren m. Rush

Imelda McCain was a nurse for 15 years, but she always thought about opening her own business. The birth of her 7 year-old son, Lucas, however, has had a tremendous influence on the direction of that business. “When Lucas was born, everything changed,” she say. “I look at the world differently, and I want Lucas to be acquainted with and aware of the global community that he lives in, not just his local culture and surrounding neighborhood.
From that maternal desire, the concept for Playing Mantis, McCain store in Nyack, began to take shape. With support from her husband, Dr. Donald A. McCain, a surgical oncologist in Hackensck, N.J., Imelda began to make her vision a reality. The store which opened in September 2006, features “toys and craft made by hand from around the world inspired by children and mother-nature. Each toy, each craft, tells a story of a heritage, of a culture, and of a passion with artistic and humane expression. END_OF_DOCUMENT_TOKEN_TO_BE_REPLACED